1983: Through the first 12 games the Seahawks play up and down football, sweeping the Los Angeles Raiders while enjoying a distinct home field advantage where fans perfected the NFL's first "wave." Back-to-back road losses to the St. Louis Cardinals and Denver Broncos, however, led to a leveling 6-6 record."
With their playoff hopes dwindling, the Seahawks beat the Kansas City Chiefs 51-48 in a overtime shootout at the Kingdome. The win would boost the Seahawks to win 3 of their last 4 games to finish with a 9-7 record, good enough for a playoff berth. In the Wild Card game the Seahawks would use a balanced offensive attack to bet the Denver Broncos 31-7 at the Kingdome. A week later the Seahawks drive 66 yards in 5 plays late in the 4th quarter to capture divisional playoff win over the Dolphins 27-20 in Miami. However, a week later in the AFC Championship Game the Seahawks season would end with a 30-14 loss to the Raiders in Los Angeles.

1984: The Seahawks seize the momentum from the previous season by winning 12 of their first 14 games. Along the way the Seahawks defense posts 3 shutouts, including a game at the Kingdome on November 4th in which they beat the Kansas City Chiefs 45-0 in a game highlighted by 4 touchdowns off interceptions returns including 2 by Dave Brown. However the Chiefs would get revenge with a 34-7 win in the next to last game of the season, which set up a showdown for the AFC West in the final game of the season at the Kingdome against the Denver Broncos. The Seahawks would fall by a score of 31-14 to finish with a 12-4 record, but the loss forced them to settle for the Wild Card. In the Wild Card Game the Seahawks defense forced 3 turnovers and 6 sacks in a 13-7 win over the Los Angeles Raiders at the Kingdome. However a week later their season would end with a 31-10 loss to the Dolphins in Miami.

1985: The Seahawks play mediocre football all season while posting a disappointing 8-8 record. During the season the Seahawks would win 2 straight only to lose their next 2, a pattern that repeated it self 4 times. Among the highlights was QB Dave Krieg who passes 3,602 yards on the season, highlighted by 405-yard passing game in a comeback win over the Atlanta Falcons at the Kingdome on October 13th.

1988: Steve Largent continues to make history as he sets the career record in receiving yards, as the Seahawks win their first 2 games. However in the 3rd game QB Dave Krieg suffers a shoulder separation and misses nearly 2 months as the Seahawks barely keep their head above water at 5-5. When Krieg returned the Seahawks would catch fire winning 3 of their final 4 games to capture their first AFC West title with a 9-7 record. However, the Seahawks would fall 21-13 in the Divisional Playoffs to the Bengals at Cincinnati.

27 other products in the same category:

Best of the Japan Explosion...

EVEL KNIEVEL: The Last of the...

HISTORY OF THE BIG JAPAN... 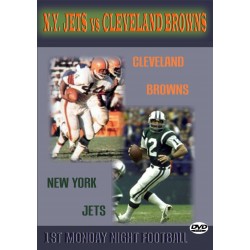 Muhammad Ali vs. Ken Norton The...

On The Edge starring Bruce Dern...